BLUF: Lead with the benefits before the features.
When Apple announced the first iPod they didn't market it as a 6.5 ounce MP3 player with a 5 GB hard drive. Instead, the copy simply read, "1,000 songs in your pocket."

When I saw this random tweet about Amazon's Fire TV I stopped and asked myself, "How does that compare to Apple TV?" Then I realized it didn't matter.

What's redline on your car engine? How fast is your smartphone's CPU? Is the CPU dual-core or quad-core? Does your car have four, six, or eight cylinders? How many cubic inches or liters does it displace?

Detailed tech specs matter to an engineer but they don't have the same marketing impact on consumers. This CNBC sponsored tweet, taken slightly out of context to illustrate my point, should probably be tailored for the latter in a world where color and style matter in consumer electronics. Tech specs were once important, but, nowadays, they're not a big deal for consumers. It's all about best possible customer experience. 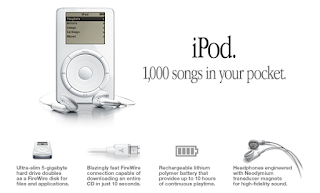