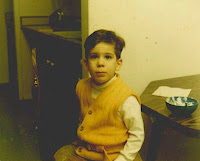 Yesterday, I read Ernest Hemingway's A Day's Wait. It's about a boy who is waiting to die from the flu. He has a temperature of 102°. He heard that any temperature over 44° was deadly. For an entire day, he simply waits to die, not understanding the difference between Fahrenheit and Celsius. Once he learns the difference between the two temperature scales and that he's not going to die, he simply goes back to his every day routine, but he's a bit more sensitive to the world. Children are resilient like that.

This story reminds me of two events in my life. The resiliency part brings back a specific memory when I was five years old. It was the first time my parents took me from Brooklyn to Huntington to show me the new house that we were going to be moving into. When my father told me that this would be our new home, I cried as we stood on the front lawn.

I asked him, "What about my friends?" I was obviously upset that I'd be leaving my "life long" friends of just a couple years.

My father hugged me and said, "You'll make new ones."

That thought hadn't occurred to me. I could simply make new friends. As soon as he said it, it all made perfect sense and I was completely over the trauma of moving to a new world.

Miscommunications
When I was about seven years old, I experienced the biggest miscommunication of my childhood. My parents were born in the mid 1930s and they grew up listening to radio programs like The Shadow, The Lone Ranger, etc. In the early 1970s, when I was about seven years old, they bought some cassette tape recordings of the old radio shows. One night, I sat with my entire family in our downstairs basement, which was laid out for entertainment. It was a game room with a wet bar, piano, organ, pool and ping pong table as well as a quadraphonic sound system.

One of the recordings that we listened to was Orson Welles' radio drama of H.G. Wells' novel The War of The Worlds. The broadcast talked about Martians who had landed in Grover's Mill, NJ. I knew that we were listening to a recording of a radio broadcast from decades ago. And I knew that New Jersey wasn't very far away – I had been there frequently. But, I also knew if Martians had attacked us in the past, so close to our home, that it could happen again.

So, when I asked my parents, several times, if these events had really transpired, they unknowingly answered, "Yes."

Obviously, they were answering the wrong question. I was asking if Martians had really attacked us. They heard me asking if this performance had really been broadcast over the radio.

I was reliving the panic of October 30, 1938, when many in the public thought the dramatic broadcast was real and fled their homes. Many listeners sued the network for "mental anguish" and "personal injury," but nearly all were dismissed. The newspapers may have played up the extend of the panic, but to me, and those before me, it was real.

I was terrified and, unlike the resilience of finding new friends, it took me a while to get over the fear of Martians.

You should listen to the episode at this link:

I'm listening to it now.
The ad prior to the podcast, about a $280K annual bandwidth bill, is amazing.