Yet Another Aviation Lesson Learned 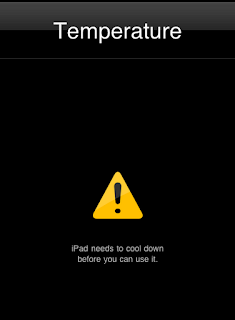 This past weekend, I flew down to Norfolk, VA. I was surprised that it was actually cool when I left Morristown, NJ but the forecast called for highs around 90° F so I knew that it would be warming up.

I had never flown into Norfolk International Airport and I hadn't printed out a hard copy of the approach procedures or taxi diagram since that information was on my iPad.

It was very pleasant at my cruising altitude of 6,000'. But, I could feel the heat and humidity when ATC stepped me down to 3,000' as I approached my destination. I realized that it would be an uncomfortable ten minutes, once I landed, until I reached my tie down spot and opened the door. Most small planes don't have air conditioners – it's all about the weight – so the only air movement inside the plane happens when it's flying.

As I touched down, the tower told me to expedite a turn onto the taxiway because there was a jet on short-final approach behind me.

I had already brought up the taxi diagram on my iPad so I knew exactly where I was and where I needed to go. Then, within 30 seconds of landing, the iPad display went black and it shutdown. It had overheated.

Obviously, this isn't an emergency situation but my heart did skip a beat as I evaluated my options before ground control told me to move. I figured, worst case, I could inform ground control that I needed progressive taxi instructions to the terminal, but that would be hard on my ego. After all, I didn't want to seem unprepared. Luckily, I remembered that I also had the taxi diagram on my iPhone. The electronic taxi diagrams are very handy since they not only display the layout of the airport's runways and taxiways, but they also mark your exact location, via GPS, within a couple meters.

As I brought up the taxi diagram on my iPhone, I wondered if it, too, would shutdown due to the heat. Luckily, it didn't, but this is a scenario I will be better prepared for, next time.
Posted by Joe Moreno at 11:00 AM