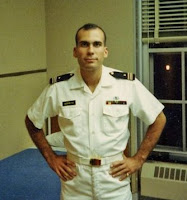 When I was a Midshipman at the Naval Academy I took a Law for the Junior Officer course. It covered the procedures, processes, and punishments of military law and the UCMJ.

Our instructor was a JAG Navy commander. He earned a Bronze Star during Desert Storm by monitoring radio networks and preventing a fratricide incident in the heat of battle.

He taught us a great lesson in creativity that he learned when he was a legal advisor to an aircraft carrier captain.

A Navy ship's captain, who is the commanding officer of the ship, can hold legal proceedings and dish out punishment. One punishment that's still on the books in the U.S. Navy is bread and water. To receive this punishment, a prisoner's first certified as healthy by the ship's doctor before confined to the brig.

My law professor told us that the bread and water punishment didn't work out as well as expected. The delinquents ended up bragging, after their incarceration, about how they survived the "old man's" most severe punishment allowed by law. Instead of a punishment, it became a point of pride.

My professor had his ship's legal team take a closer look at the bread and water regulation:

(A) if imposed upon a person attached to or embarked in a vessel, confinement on bread and water or diminished rations for not more than three consecutive days;

A light bulb went off when they read, "diminished rations." Instead of serving bread and water, the prisoner was now fed baby food. Same caloric content, just a different medium.

I know life on a carrier isn't exactly an alaska cruise, but I didn't know how tough it was. Then again, what else should I have expected from a military ship?