Tweeting and Meeting the McCains

I saw that Cindy McCain (Senator John McCain's wife) was fairly active on Twitter so I began following her. Around lunchtime, today, she mentioned that Senator McCain was cooking.

Brats for lunch. John is the grill master!less than a minute ago via Twitter for BlackBerry®

So, I asked her to tweet out a photo:


@CindyhM1 You should tweet out a photo of the Senator grilling. Does he wear a "Kiss the cook" apron? ;^Dless than a minute ago via Twitter for iPhone

Well, a few minutes later, she posted a picture of Senator McCain:


John in his grilling outfit! http://yfrog.com/gzh44jnjless than a minute ago via Twitter for BlackBerry®

Here's the photo she took: 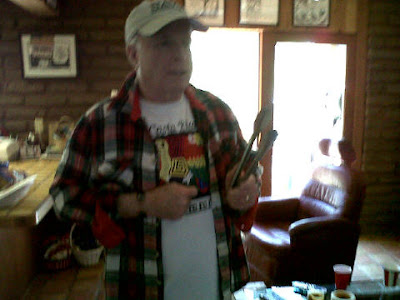 Of course, I thanked her:


@CindyhM1 That's beautiful. I love it! Thanks!less than a minute ago via Twitter for iPhone

Meeting The McCains
My wife and I got a chance to meet the McCains about a year and a half ago. Senator McCain, who gave the commencement address when I graduated from the Naval Academy in 1993, was back in Annapolis for his 50 year reunion in 2008 - which coincided with my class' 15 year reunion.
After a parade, that reunion weekend in 2008, we met at the Superintendent's house for a garden party reception. Cindy was at the reception with her son, Jack, who was a "firstie" (senior) at the Academy, and her daughter, Meghan.
I spoke with Jack, for a short time, and I mentioned to him that his father gave my class' commencement address. I'm guessing that Jack must have been about seven or eight years old in 1993. I was surprised when Jack told me that he clearly remembered his father's commencement address to our class and he said that it had a big impact on him. Jack then introduced my wife and I to Cindy and we chatted for a little bit – but not too long, Cindy was a busy women with only six or seven weeks to go until the presidential election.
Posted by Joe Moreno at 5:59 PM