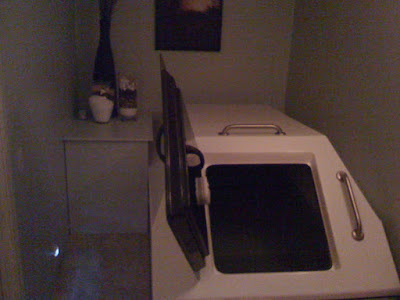 Today I floated, for the first time, in a sensory deprivation tank. For years I've been wanting to try one and I finally took the plunge.

The tank's about the size of a twin bed and it's filled with eight to ten inches of water heated to 93-94 degrees (skin temperature). About 800 pounds of epsom salt has been dissolved in the water so there's no problem floating.

The facility I went to was definitely up scale. Each person gets a private room with their own shower, a place to change, and, of course, the tank. Since it's private you get to float in your birthday suit (but you can wear ear plugs to keep the water out of them).

After rinsing off in the shower I entered the tank. Most people float with their head on the far end of the tank since it's slightly warmer there. The door to the tank is very light and you can keep it fully opened or close it - whichever makes you most comfortable. Just outside the tank is a spray bottle of fresh water in case you accidently get salt water in your eye.

Very soft music plays for about ten minutes which fades to silence. At this point I was in total, complete, darkness and quiet. Neither a photon of light nor decibel of sound could be seen or heard. I  knew when my time in the tank was up because the music started playing again and, just like the Academy Awards, that's my cue to exit.

So what happened inside the tank? Sorry to say that it wasn't anything like the 1980 movie Altered States; nor did I have visions like Lisa did on the "Make Room For Lisa" episode of The Simpsons (about 14:30 into the full episode).

But it was relaxing - very relaxing. I guess it's the closest you can get to being back in the womb as you float in solitude. There's nothing to distract you so you can focus (or not focus) on what ever you want. I could definitely get used to relaxing in one of these. The cost is similar to a massage ($40-$90 per hour).

I should sleep well tonight.
Posted by Joe Moreno at 6:00 PM

Joe - it sounds very interesting. I think I would be claustrophobic in there though. Nothing like enclosed spaces and and threat of drowning... no thanks. I'll take a regular massage instead.

Hey Joe,
What location did you do your float? I did one years ago and had some amazing "dolphin" experiences, which I found out afterward, are quite common.

I am looking for a place to float in OC, but so far the only ones I have found nearby are in San Diego.