Today was Pink Shirt Friday at work. I've known my boss/buddy for more than a dozen years and, about once a quarter, we coordinate wearing pink shirts to work on a given Friday. This week, we extended the invitation to all of the directors that work in the Product department.

The irony about today's Pink Shirt Friday is that pink slips were handed out and the entire Product department was dissolved. The layoffs - including me - were due to the fact that the Product department's original tasking had become obsolete. It's a shame because it seems like it was only yesterday when I wrote this piece.

In all actuality, it's very true that our departments's original tasking had become obsolete. Although I worked at Wyndham for only eight months, I noticed that the company had many processes and layers that could be streamlined. Slimming it down, by eliminating the Product department, will probably be a good thing. After all, lean processes are how we did it when I worked at Apple.

What Does the Product Department Do?
Generally, the Product department manages the product roadmap and it sits between Marketing and Engineering. But, it seems that our Marketing, Product, and IT departments ended up working so closely together that Marketing could deal directly with the engineers in many cases - especially once a project's requirements had been documented.

This video best describes the perception of the Product department.


Practically speaking, you can think of one duty of the Product department as a waiter/waitress who's filling a role between a restaurant customer and the kitchen.

It's About The People

In my short time at the company, I was part of a few key product launches that received a fair amount of attention including the Room Key joint venture and the mobile websites and apps launches.

The disappointing part is that I relocated from San Diego to the Greater NYC area for this job and it barley lasted eight months. But, I've been pleasantly surprised at just how much I enjoyed working with my fellow managers, directors, and VPs who are very thorough, smart, and hard working people. 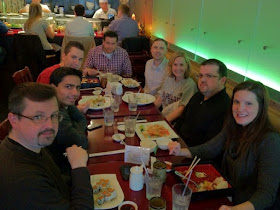 It's not often that you work with a team of people who stay on task, no matter what, until the job is done; especially during the late night conference calls, like this one, where you end up hearing the birds chirping as you watch the sunrise before the call is over.

In the end, with the Product department no longer needed, all of the directors were given notice, today. And, although I'd seen many rounds of layoffs at Apple, this was a first for me. Fortunately, the company seems to have gone above and beyond and treated us well.

Oh, there's one other thing that I will certainly miss: Free Ice Cream Fridays.