What do you mean my iPad is "Not Charging"? 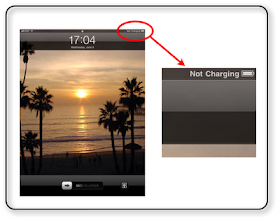 I was highly disappointed the first time I plugged my iPad into my MacBook Pro. My laptop is a little long in the tooth, but I didn't expect it to indicate "Not Charging". I thought, for sure, that it was just a bug until I did a little digging. It turns out that the iPad pulls more power than my MacBook delivers over its USB connection. I've seen problems like this, in the past, when plugging into low power USB ports typically found on keyboards. These keyboard ports were only designed to power mice not recharge an external device. So it's surprising that the iPad wouldn't charge when plugged directly into my MacBook.

Well, it turns out that the "Not Charging" message isn't entirely true. The iPad in the screenshot, above, had about an 81% charge when I plugged it in and now, several hours later, it's at 100%. I guess it's just a trickle charge.

Update: Great point from SteamAtom in the comments, below. It seems, in my case, that the iPad is only charging when it's sleeping. As soon as I turn it on it stops charging.
Joe Moreno at 5:12 PM
Share