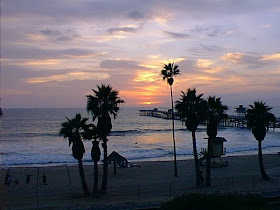 A poor-man's technique to stop spam is called gray listing.

Here's one implementation of how it works...

If the gray listing e-mail service provider hasn't received any e-mails from the sender recently (say, within the last two weeks) they will tell the sender's mail server to try again later. This isn't a problem since the e-mail protocol (SMTP) is designed to keep trying for a couple days before giving up.

As long as the sending mail server waits a small amount of time (say, ten minutes) before trying again, then the e-mail will go through on the second attempt. If the sender has recently sent an e-mail to the recipient's e-mail address then the e-mail goes through on the first try since the sender's e-mail address is on the gray list. (The e-mail is black listed first, then it's white listed. Black + White = Gray)

Because of how this works, users sometimes notice the first two e-mails, sent from the same person (who hasn't sent an e-mail in the past two weeks) may be delivered out of order if the e-mails are sent within a few minutes of each other. (I've personally seen this happen, but it's rare.) 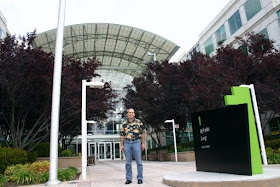 I wonder if Steve Jobs had his photo taken in front of the 1 Infinite Loop HQ like I did on my last day at Apple in 2007?
Joe Moreno at 10:04 AM No comments:
Share

Here's to the Crazy Ones 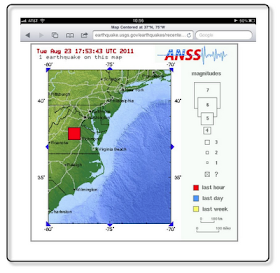 Did you hear that there was an earthquake on the East Coast, today? Kind of hard not to hear about it.

I saw this post about the earthquake devastation in D.C. which made me laugh.

But, in retrospect, I doubt that East Coast building codes are up to California's standards when it comes to earthquake-proofing their structures. On the other hand, California, which has never recorded a hurricane, would do poorly in a storm of that magnitude. It just depends on what you're used to.
Joe Moreno at 2:20 PM No comments:
Share

The Good, The Great, and The Bad Business Models

Lately, there's been a lot of complaining about AT&T because they "streamlined" their text messaging plans. In other words, they removed their cheapest plan thereby raising the rates for the casual "texter."

There are three basic business models when it comes to pricing technology over time:

1. Good: Lower your prices as your technology costs decrease like Amazon Web Services (pass along the savings).

2. Great: Keep your prices the same, but add new features like Apple (innovation).

3. Bad: Increase your prices, even as your costs decrease, without adding new features like AT&T (elasticity and conversion costs).

A college buddy, who worked for a large telecommunications company, explained the wireless carrier's business model best: Squeeze every possible penny out of every single customer.

It reminds me of the last time I ordered a home land line. The cost for caller ID was $7.99/month, but, the operator told me that this feature would be increasing to $9.99/month, for all customers, in two months. Seriously? A 25% increase just to display a 10 digit number on my phone?

It was the iPhone that brought visual voice mail to market and it was when Google Voice relaunched Grand Central that we had the ability to send and receive free text messages using both our phone and computer. These two simple features could have been implemented by the wireless carriers years earlier.

Continually raising prices to see what the market will bear is a perfectly legitimate business model, but it really ticks off the customer. Like a big, faceless, bank, you almost hope that these companies will fail. I say almost, because any punishment, fine, or bankruptcy will be passed along to the customer.

We hate these businesses only as long as poetic justice doesn't come out of our own pocket.
Joe Moreno at 10:16 PM No comments:
Share

One of the first things that people notice when upgrading to Mac OS X Lion is that scrolling works the opposite way that it used to worked.

Without a doubt, this will seem backwards – at first. Most people have said that it takes several days to get used to the new format. But, why change a paradigm that's work for the last quarter century?

The answer is simple and most people haven't really noticed that this is the exact same way that scrolling works on the iPhone. Before Lion, if you wanted to scroll down a web page, you'd have to grab the scroll bar and pull it down. The metaphor was that you were pulling the window down the page to view the content "below the fold."

Now, the metaphor has been changed to match the iPhone and a layer of abstraction has been removed. Instead of pulling a window down to view the content, you now pull the content up to see it. No more window model – it's just you and your content.

Give it several days to a week to see if you get used to it – it's like learning to drive on the other side of the road. If you use the iPhone, then you'll probably get used to it and not notice it in the same way that you never noticed that the iPhone worked the opposite way.

But, if you really can't stand it, you can change the settings back to always display scroll bars in the General part of System Preferences.
Joe Moreno at 1:07 PM No comments:
Share

Bark for Your Rx 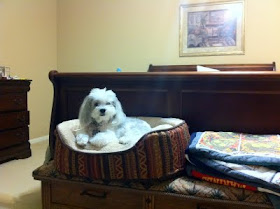 Tonight, my wife asked me to get a pill for her that was in the kitchen which reminded of a funny story...

Several years ago, my wife and I were were in the kitchen just before bedtime. I had taken out a pill for the dog and put it down next to the kitchen sink. It took me about 30 seconds to get the peanut butter from the pantry so that the dog would swallow the pill. When I turned around to pick up the dog's pill, it was gone.

As my wife was putting down a glass of water, I asked her what she did with the dog's pill. Yup, you guessed it, she mistook the dog's pill for her own and swallowed it.

I called the San Diego Poison Control Center while my wife tried to "retrieve" the pill.

If you haven't had the opportunity to call the Poison Control Center then be prepared to answer a lot of questions – this is not an organization you call anonymously. But, it's more than worth the time it takes to answer their questions in exchange for the service they provide.

It turned out that there was nothing for us to worry about since the antibiotic that my wife swallowed was meant for a dog that weighed about a dozen pounds. There were no shortage of jokes about this incident that night.
Joe Moreno at 8:48 PM No comments:
Share
‹
›
Home
View web version